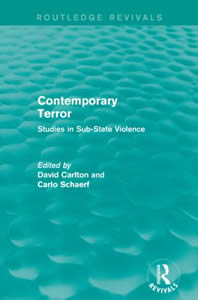 First published in 1981, this book contains papers on terrorism, presented to the International School on Disarmament and Research on Conflicts (ISODARCO). The subject is a complex one as ‘one man’s terrorist is another man’s freedom-fighter’. No simple solution exists to the threat to domestic and international stability posed by the increased use of violence employed by various politically-motivated groups, challenging the authority of sovereign states.
Many of the world’s leading authorities on terrorism and sub-state violence are among the contributors here, including J. Bowyer Bell, Jillian Becker, and Alessandro Silj, and participants come from a wide range of countries and professions. This book will be of interest to students of conflict and international relations, as well as policy-makers at many levels, and the general public in many countries.
Seventh Isodarco Summer Course, Ariccia (It), August 18-27, 1978.

Preface
Notes on the Contributors
List of Course Participants

The Media and Terrorism
Yonah Alexander

Jillian Becker (British) is author of Hitler’s Children: The Story of the Baader-Meinhof Terrorist Gang (1977). This work has been translated into French, German, Dutch, Danish, Norwegian, Spanish, Portuguese and Japanese. On the subject of terrorism she has in addition published numerous articles, given lectures and has broadcast on radio and television to many part of the world. She is also a novelist with a special interest in South African themes.

J. Bowyer Bell (US) is Senior Research Associate at the Institute of War and Peace Studies, Columbia University. He has written nine books and fifty articles on war, revolution and political violence. His most recent work is A Time of Terror: How Democratic Countries Respond to Revolutionary Violence (1978). He holds a Ph.D. degree from Duke University and has been awarded, at various times, a Fulbright Fellowship, a Guggenheim Fellowship and a Ford Foundation Grant.

David Carlton (British) (co-editor) is Senior Lecturer in Diplomatic History at the Polytechnic of North London. He holds a Ph.D. degree from the University of London. He is author of MacDonald versus Henderson: The Foreign Policy of the Second Labour Government (Macmillan: London, 1970) and of numerous articles on modern international politics. He is co-editor of three previous volumes in this series, The Dynamics of the Arms Race; International Terrorism and World Security; and Arms Control and Technological Innovation (Croom Helm: London; John Wiley: New York, 1975–7). He is associate editor of Terrorism: An International Journal.

Bernard T. Feld (US) is Professor of Physics at Massachusetts Institute of Technology. He is a former Secretary-General of the Pugwash Conferences on Science and World Affairs. He has written widely on problems of arms control and is currently editor-in-chief of the Bulletin of Atomic Scientists. He is co-editor of Impact of New Technologies on the Arms Race (1972) and The Future of the Sea-Based Deterrent (1973).

William F. Gutteridge (British) is Professor of International Studies and Director of Complementary Studies at the University of Aston in Birmingham. He was formerly Senior Lecturer in Commonwealth History and Government at the Royal Military Academy, Sandhurst. He is author of Armed Forces in New States (1962); Military Institutions and Power in the New States (1965); The Military in African Politics (1969); The Coming Confrontation in Southern Africa (1971); and Military Regimes in Africa (1975).

Werner Pfeifenberger (Austrian) is Professor of Political Science at the University of Munster. He is also Director of the Austrian Institute of Political Education in Vienna. He is author of Die UNO-Politik der Volksrepublik China (Zurich, 1978).

Carlo Schaerf (Italian) (co-editor) is Professor of Physics at the University of Rome. He was formerly a Research Associate at Stanford University and on the staff of the Italian Atomic Energy Commission. With Professor Eduardo Amaldi he founded in 1966 The International School on Disarmament and Research on Conflicts (ISODARCO). He was appointed Director of ISODARCO in 1970. He is co-editor of the previous volumes in this series, The Dynamics of the Arms Race; International Terrorism and World Security; and Arms Control and Technological Innovation (Croom Helm: London, and John Wiley: New York, 1975–7).

Alessandro Silj (Italian) is a freelance writer. From 1959 to 1966 he was on the staff of the European Community in Brussels. Thereafter he was at the Harvard Center for International Affairs and then Deputy Director of the European Community Press and Information Service in Washington. He has published books in Italian on the transatlantic ‘brain drain’, on the Red Brigades and on the press coverage of the kidnapping of Aldo Moro. His work on the Red Brigades has appeared in English translation as Never Again Without a Rifle! (1978).

Frank Wright (British) has been Lecturer in Political Science at Queen’s University, Belfast since 1973. He was formerly a Research Fellow at New College, Oxford. He is author of ‘Protestant Ideology and Politics in Ulster’, European Journal of Sociology, XIV (1973) 213–80.