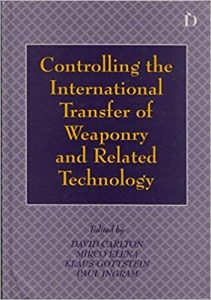 Preface by Carlo Schaerf
List of Abbreviations
Notes on the Contributors

The UN Arms Transfer Register and its Antecedents
Paul Ingram

Georgi Arbatov (Russian) is the Director of the Institute for the USA and Canada, as well as a member of the Russian Academy of Science. He is author of The System: An Insider’s Life in Soviet Politics.

Francesco Calogero (Italian) is Professor of Theoretical Physics at the University of Rome ‘La Sapienza’ and is the Secretary-General of the Pugwash Conferences on Science and World Affairs.

David Carlton (British) (co-editor) is Lecturer in International Studies at the University of Warwick. He is author of Anthony Eden: A Biography and of Britain and the Suez Crisis. He is co-editor of 12 previous volumes in this series.

Dorinda Dallmeyer (US) is Research Director at the Dean Rusk Center for International Comparative Law, University of Georgia, Athens. She is editor of The Strategic Defense Initiative: New Perspectives on Deterrence.

Mirco Elena (Italian) (co-editor) is a researcher at the Istituto Trentino di Cultura/CMBM in Trento.

Vidor Gilinsky (US) is a former Commissioner of the US Nuclear Regulatory Commission.

Klaus Gottstein (German) (co-editor) is Emeritus Professor of Physics and Director of the Research Unit on Problems of Science and Society within the Max-Planck-Gesellschaft in Munich.

Paul Ingram (British) (co-editor) is a Researcher at the Oxford Research Group and is conducting postgraduate research at the Department of Politics and International Studies, University of Warwick.

Jilrgen Scheffran (German) is Research Associate at the Interdisciplinary Research Group on Science, Technology and Security Policy in the University of Darmstadt.

Dietrich Schroeer (US) is Professor of Physics at the Department of Physics and Astronomy at the University of North Carolina, Chapel Hill. He is author of Science, Technology and the Nuclear Arms Race.

Kosta Tsipis (US) is Director of the Program in Science and Technology for International Security at the Massachusetts Institute of Technology.