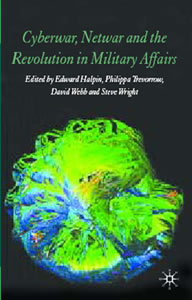 The end of the Cold War ushered in a new phase of global security in which new threats and challenges emanate from non-conventional sources, and in which the weapons and means to prosecute war harness new technology. By the mid-1990s terms such as cyberwar and netwar were being used to explain a new way of thinking about war. The intervening years have seen the development of new defence policies, such as the US military Vision for 2020 and the Revolution in Military Affairs, whilst the threat of terrorism has become a painful and sad reality. The period has also seen the development and deployment of a range of new technologies for military operations ranging from new smart mechanisms to deliver weapons to surveillance and communications technologies that can change the very nature of warfare and security. This book attempts to consider this balance between the technologies and policies deployed to respond to terror and the need for human and civil rights.

Part I: Cyberwar, Netwar and the Revolution in Military Affairs: Defining the Issues

Part II: Implications of the Problem

Introduction
Theory, information technology and accident
War on terrorism – the state of emergency
The necessity and problematic of an enemy
War on Afghanistan – from postmodern moments to information isolation
Battle for the strategic truth
War on Iraq – differences in perceptions
The fog of peace

Technology as a Source of Global Turbulence?
Dr Stefan Fritsch

Nuclear Weapons and the Vision of Command and Control
Dr Bruce D. Larkin

Information Warfare and the Laws of War
Geoffrey Darnton

Part IV: What is Being Done – or Must Be Done?

A Bridge Too Far?
Mike Moore

Martin Bayer studied War Studies at King’s College London (2000–2003) with the main focus on European Defence, simulations, media, RMA, and civil–military relations. In 2004, he was awarded a Master of Peace and Security Studies from the Institute of Peace and Security Studies at the University of Hamburg (IFSH). He has given several presentations at international conferences, primarily on the depiction of violence and war, military strategy, and network-centric warfare (NCW). Currently, he is German correspondent for Jane’s Defence Weekly.

Gary Chapman was educated at Occidental College in Los Angeles, California, and at Stanford University. He has also taught at both institutions. Currently, he is director of ‘The 21st Century Project’ at the Lyndon B. Johnson School of Public Affairs, the graduate school of public policy at the University of Texas in Austin. He is associate director of the Telecommunications and Information Policy Institute, also at the University of Texas. Chapman currently writes a bi-weekly column for The Austin American-Statesman, a column which runs every other Friday on the op-ed page of the newspaper.

Geoffrey Darnton is Head of Knowledge Transfer for the Institute of Business and Law, Bournemouth University and Programme Leader for their MA in Information Systems Management. He is a Chartered Engineer, Chartered Statistician, and Certified Management Consultant. He compiled, edited and wrote much of the London Nuclear Warfare Tribunal summary and judgment. His written publications include Information in the Enterprise and Business Process Analysis. He has contributed to other books, including Information Systems in Organizations. Information Warfare is one of his main research interests.

Dr Stefan Fritsch is currently a Lecturer for International Relations in the Department of History and Political Science at the University of Salzburg. His research interests include technology and International relations/International political economy, multinational corporations, issues of globalization and global governance, and European integration/EU.

Dr Edward Halpin is Director of the Praxis Centre at Leeds Metropolitan University, UK. He has researched human and child rights for many years, including work for the European Parliament Scientific and Technical Options Assessment (STOA) Unit. He co-edited the book Human Rights and the Internet (Palgrave Macmillan) and has published many articles in this subject area. In addition to working on social informatics within the School of Information Management, he is involved in teaching peace and conflict resolution in the School of Applied Global Ethics at Leeds Metropolitan University.

Dr Gus Hosein is a Visiting Fellow in the Department of Information Systems at the London School of Economics and Political Science. He is also a Senior Fellow with Privacy International where he directs the Terrorism in the Open Society programme. He also co-ordinates the Policy Laundering Project, a joint initiative between PI, Statewatch, and the American Civil Liberties Union. He has a PhD from the University of London and a B.Math(Hons) from the University of Waterloo.

Dr Bruce Larkin studied at the University of Chicago (1950-56) and Harvard University (1960-65). He then joined the founding faculty of the University of California at Santa Cruz, where he is now Professor Emeritus of Politics. His books include Nuclear Designs: Great Britain, France, and China in the Global Governance of Nuclear Arms (1996) and a study in war theory, War Stories (2001).

Diego Latella studied Computer Science at the University of Pisa where he graduated (with honours) in 1983. In 1986 he joined CNUCE, an Institute of the Italian National Research Council (CNR) where he currently works in the Formal Methods and Tools group. He lectures at the Department of Computer Science of the University of Pisa. He is a member of the Scientific Council of the Interdepartmental Center for Sciences for Peace (CISP) of the University of Pisa and of the Advisory Board of Privacy International. His current main research interests fall in the area of formal specification and verification models for concurrent systems and their application.

Massimo Mauro is principal administrator at the Council of the European Union, Directorate-General C 1 (Internal Market), where he is responsible for all technical harmonization legislation. He holds a dottore in fisica degree from the State University of Catania, Italy, and speaks 10 languages. In addition to his EU work, he has also held public and private sector positions with research and technology firms in the UK, Italy, Germany, and Finland. He is a full member of the Association for Computing Machinery, of Computer Professionals for Social Responsibility, and of AICA, the Italian computer society.

Mike Moore is contributing editor of the The Bulletin of the Atomic Scientists, a peace-and-security magazine founded at the University of Chicago in 1945 by key members of the Second World War atom bomb project (www.thebulletin.org). Previously, he was editor of the Bulletin; editor of Quill (the magazine of the Society of Professional Journalists); and an editor or reporter at the Kansas City Star, the Chicago Daily News, the Chicago Tribune, and the Milwaukee Journal.

Dr Peter G. Neumann has doctorates from Harvard and Darmstadt. He works in SRI’s Computer Science Lab and is concerned with computer systems and networks, security, reliability, survivability, safety, and many risk-related issues such as voting-system integrity, crypto policy, social implications, and human needs, including privacy. He is the 2002 recipient of the National Computer System Security Award.

Fanourios Pantelogiannis is a PhD student at the Free University of Brussels (ULB). His first research work, Russian Military Reform, was published online by the Institute of Advanced European and International Studies. His more recent publications include European Entrepreneur’s Handbook, published in Greek in 2004. His main research interests are the EU political system, the Russian military and international negotiations.

Lieutenant Colonel Jari Rantapelkonen graduated from the Finnish Military Academy. His current assignment is as an Information Operations Instructor for the National Defence College in Helsinki, Finland. He has published widely, writing books and articles on the philosophy of military science, operations and tactics. Currently he is preparing a PhD for the University of Helsinki and National Defence College on the phenomena of Information Warfare.

Professor Carlo Schaerf is Professor of Physics at the University of Rome ‘Tor Vergata’. From 1978 to 1984 he was President of the National Commission for Nuclear Physics (INFN). Schaerf then became President of the National Committee for the Physical Sciences at the Ministry of Public Education (1984–1987). In 1966 Professor Carlo Schaerf founded (with Professor Edoardo Amaldi) the International School on Disarmament and Research on Conflicts (ISODARCO). Professor Schaerf became its Director in 1970 and Director and Chairman of the Board in 1991. He is editor of some 25 books on disarmament and physics, as well as the author of approximately one hundred articles in international refereed scientific journals.

Gian Piero Siroli has a BSc, a Diploma and a ‘Corso di Perfezionamento’ in Physics from the University of Bologna. He is currently lecturing on ‘Computer and Network Security’ in the Department of Physics at the University of Bologna and on ‘Information Technologies and International Security’ in the Computer Science Department at the University of Pisa. In 1999 he participated at the UN meeting on ‘Developments in the field of information and telecommunications in the context of International security’, hosted by DDA and UNIDIR at Palais des Nations in Geneva.

Dr Philippa Trevorrow has a BSc B(Ed.) Hons in Mathematics and Education, and a PhD from the University of Exeter. She currently works as a Research Officer in the School of Information Management at Leeds Metropolitan University, UK. She has been involved with work in the Praxis Centre for the last two years, including issues on peace and conflict resolution, youth citizenship and E-government.

Professor David Webb is Professor of Engineering, head of the Centre for Applied Research in Engineering, and Director of the Praxis Centre at Leeds Metropolitan University. He obtained a D.Phil. in Space Physics in 1975 from the University of York and after periods as a post-doc at Bell Labs and the UK, joined the Directorate of Scientific and Technical Intelligence at the MoD in London in 1978. He moved to the Computer Unit at Leeds in 1979 and then into the School of Engineering in the early 1980s. He has published widely on the application of engineering modelling and on Nuclear Disarmament and the Militarisation of Space. He is currently working with colleagues in the Praxis Centre on the ‘Study of Information and Technology in Peace, Conflict Resolution and Human Rights’.

Chris Wu (original name Wu Fan) is a native of Wenchang County, Hainan Island. He graduated from the Anhui Normal University in 1965, having studied and worked in the Department of Physics. In 1980 he relocated to the United States to study for a Masters degree in the Department of Electronics and Computer Engineering, California State University, Los Angeles. In 1987 he became a Senior Electronics Engineer at Xerox Corp’s microelectronic central laboratory. He is currently Chief Editor of China Affairs and a Research Fellow at the Centre for Modern China. His research interests include: politics, economy, military affairs, diplomatic affairs, and the relationship between Mainland China and Taiwan.

Dr Steve Wright is a Visiting Professor at Leeds Metropolitan University, UK, Chair of Privacy International and the former Director of the Omega Foundation. His recent EU research tracked the armourers of the torturers. He is best known for his European Parliamentary report highlighting the US global telecommunications interception network – Echelon.