The Path to Nuclear Disarmament 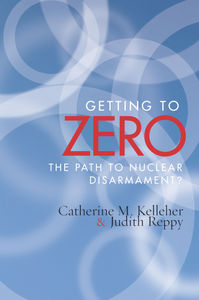 President Obama’s steps toward nuclear disarmament have so far been “more expectable than revolutionary, but they do emphasize renewed American leadership,” according to a new book co-edited by long-time ISODARCO participants Catherine McArdle Kelleher of Brown University and the University of Maryland, and Judith V. Reppy of Cornell University. Getting to Zero: The Path to Nuclear Disarmament (Stanford University Press, 2011) takes on the much-debated goal of nuclear zero – exploring the serious policy questions raised by nuclear disarmament and suggesting practical steps for the nuclear weapon states to take to achieve it. The book documents the successes and failures of six decades of attempts to control nuclear weapons proliferation and asks the urgent questions about what else world leaders, politicians, non-government organizations, and scholars must address if nuclear zero is to be a real policy goal.
Published in hard and paperback versions and in e-book format, the collection emerged from a series of conversations and exchanges that took place under the Carnegie Corporation project “Dialogue among Americans, Russians, and Europeans” (DARE), which in turn influenced several ISODARCO programs led by Reppy and Kelleher. To cite only a few of the familiar ISODARCO lecturers included in Getting to Zero, there are articles by Alexei Arbatov, Nadia Arbatova, Marco DeAndreis, Matthew Evangelista, Venance Journe, and Jeffrey Lewis, as well as by Kelleher and Reppy themselves.

How We Got to Where We Are

The Vision of a World Free of Nuclear Weapons
David Holloway

Is a World without Nuclear Weapons Attainable? Comparative Perspectives on Goals and Prospects
Golz Neuneck.

The U.S. Nuclear Arsenal and Zero: Sizing and Planning for Use-Past, Present, and Future
Lynn Eden

Europe, Nuclear Disarmament, and Nonproliferation: What Next?
Nadia Alexandrova-Arbatova

Steps toward a World Free of Nuclear Weapons
David Holloway