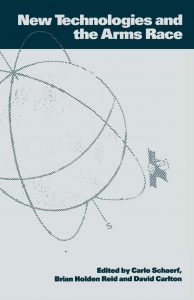 PART I CIVILIAN VERSUS MILITARY TECHNOLOGY

Cosmic Space and the Role of Europe
Rolf Linkohr

A Technical Assessment of Potential Threats to NATO from Non-Nuclear Soviet Tactical Ballistic Missiles
Benoit Morel and Theodore A. Postol

Nuclear Disarmament and Peaceful Nuclear Technology-Can We Have Both?
Theodore B. Taylor

Desmond Ball (Australian) was Research Associate at the International Institute for Strategic Studies from 1979 to 1980. Since 1984 he has been Head of the Strategic and Defence Studies Center at the Australian National University, Canberra. He is author of Politics and Force Levels: The Strategic Missile Program of the Kennedy Administration.

Paul Bracken (US) has since 1983 been Professor of Public Policy at Yale University where he works in the fields of national security policy and arms control. He was previously at the Hudson Institute, New York. He is author of The Command and Control of Nuclear Forces.

Paul S. Brown (US) has worked since 1966 in the Lawrence Livermore Laboratory, where he is at present Assistant Director for Arms Control. During 1986 he served as US Department of Energy Delegate to the Nuclear Test Experts Meeting held in Geneva.

David Carlton (British) (co-editor) is Lecturer in International Studies at the University of Warwick. He is author of Anthony Eden: A Biography; and co-editor of The Nuclear Arms Race Debated and of The Cold War Debated.

Thomas B. Cochran (US) is a Senior Staff Scientist and Director of the Nuclear Weapons Databook Project at the National Resources Defense Council. He has served as a consultant to numerous US governmental agencies and non-governmental organisations on energy and nuclear non-proliferation matters. He holds a PhD in Physics from Vanderbilt University.

Umberto Colombo (Italian) is President of the Italian Atomic Energy Commission. He was formerly Director of the G. Donegani Research Institute.

Lloyd J. Dumas (US) is Professor of Political Economy at the University of Texas at Dallas. He was formerly Associate Professor of Industrial Engineering at Columbia University. His publications include The Overburdened Economy.

Roberto Fieschi (Italian) is Professor of Physics at the University of Parma. His field of interest is Solid State Physics. He is a member of the USPID Scientific Council.

Shalheveth Freier (Israeli) is a Physicist. He was Director of the Research and Development Authority of the Ministry of Defence of Israel (1953-6); Deputy Director-General of the Weizmann Institute of Science (1967-70); Director-General of the Israeli Atomic Energy Commission (1971-6); and Chairman of the Presidential Council for Science Policy (1977-8).

Richard L. Garwin (US) is a Physicist at the IBM T. J. Watson Research Center, Yorktown Heights, New York. He is a member of the US National Academy of Sciences and of the National Academy of Engineering; and a consultant of several US government departments and agencies.

John P. Holdren (US) is Professor of Energy and Resources at the University of California, Berkeley. He is Chairman of the US Pugwash Group and a former Chairman of the Federation of American Scientists. He is also Faculty Consultant in Magnetic Fusion Energy at the Lawrence Livermore National Laboratory.

Edy Korthals Altes (Dutch) is a former diplomat. He served as his country’s Ambassador in Warsaw and in Madrid. He was also a Permanent Delegate to the European Community in Brussels; and Director for the Foreign Service in The Hague.

Giuseppe Lanzavecchia (Italian) is Assistant to the President of the Italian Atomic Energy Commission. His principal interest is in strategies for energy and for technological innovation. He is involved in technological forecasting and assessment. He was formerly Head of the Materials Department and then Scientific Director of the G. Donegani Research Institute.

Francesco Lenci (Italian) is a Physicist. He is a researcher at the Consiglio Nationale delle Ricerche (CNR) at the Institute of Biophysics at Pisa. He is Secretary-General of USPID; and was a member of the ‘Initiative Group’ that promoted the International Forums in Moscow in July 1986 and February 1987.

Rolf Linkohr (West German) has been a Member of the European Parliament since 1979. He is Co-ordinator of the Socialist Group for Energy, Research and Technology.

F. A. Long (US) is Professor Emeritus of Chemistry and of Science and Society at Cornell University. He was Assistant Director for Science and Technology of the US Arms Control and Disarmament Agency and participated in the negotiations in Moscow that led to the Limited Test Ban Treaty of 1963.

Benoit Morel (Swiss-French) is a faculty member of the Department of Engineering and Public Policy at Carnegie-Mellon University, Pittsburgh. He was formerly a Science Fellow at the Stanford Center for International Security and Arms Control; a Senior Research Fellow at the California Institute of Technology; and an Adjunct Professor of Physics at the University of Southern California.

John E. Pike (US) is the Associate Director for Space Policy at the Federation of American Scientists. He co-ordinates the Federation’s research, public education and lobbying on space policy, including the Strategic Defense Initiative.

Theodore A. Postol (US) is a Senior Research Associate at the Stanford Center for International Security and Arms Control. Previously he served in the US Department of Defense as a scientific adviser to the Chief of Naval Operations; in the Office of Technology Assessment of the US Congress; and on the scientific staff of the Argonne National Laboratory.

George W. Rathjens (US) is Professor of Political Science at the Massachusetts Institute of Technology. He was previously associated with the US Arms Control and Disarmament Agency; and has also been Chief Scientist and Deputy Director of the Advanced Research Projects Agency of the US Department of Defense.

Brian Holden Reid (British) (co-editor) is Lecturer in War Studies at King’s College, London, and Resident Historian at the Staff College, Camberley. He was formerly editor of the Journal of the Royal United Services Institute. He is author of J. F. C. Fuller: Military Thinker. He is a Fellow of the Royal Historical Society.

Joseph Rotblat (British) is Emeritus Professor of Physics at the University of London. He started his career in Poland as a nuclear physicist and eventually participated in atomic bomb work at Los Alamos during the Second World War. As a result of this experience, he switched to medical physics. And for the same reason he became a founder of the Pugwash Conferences on Science and World Affairs of which he was Secretary General for 17 years.

Carlo Schaerf (Italian) (co-editor) is Professor of Physics at the University of Rome I. He was previously a Research Associate at Stanford University and on the staff of the Italian Atomic Energy Commission. With Professor Eduardo Amaldi he founded in 1966 the International School on Disarmament and Research on Conflicts (ISODARCO) of which he has been a Director since 1970.

Theodore B. Taylor (US) is a consulting physicist working mainly on nuclear disarmament options and non-proliferation. He gained a PhD in theoretical physics from Cornell University. He was formerly engaged in nuclear weapon design at Los Alamos National Laboratory.

Maj Britt Theorin (Swedish) has been a Member of the Swedish Parliament (Social Democrat) since 1971. Since 1982 she has been Chairman of the Swedish Disarmament Commission with the rank of ambassador. She was a founder and first Chairperson of the World Women Parliamentarians for Peace.