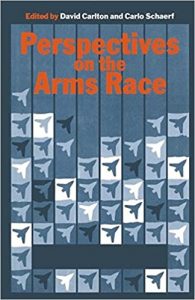 PART I THE GENERAL ARMS RACE

The Pursuit of Security in The Nuclear Age
Robert W. Malcolmson

Rendering Nuclear Weapons Impotent and Obsolete: The Origins of a Pipedream
David Carlton

Nuclear Weapons and Coercive Diplomacy: Their Impact on the Developing World
K. Subrahmanyam

David Carlton (British) (co-editor) is Lecturer in International Studies at the University of Warwick. He holds a Ph.D. degree from the University of London. He is author of MacDonald versus Henderson: The Foreign Policy of the Second Labour Government; of Anthony Eden: A Biography; and of numerous articles on modern international politics. He is co-editor of nine previous volumes in this series.

Paolo Farinella (Italian) is a physicist, working on space physics and planetary science at the University of Pisa, Italy. He is a member of tbc Italian Union of Scientists for Disarmament and a promoter of the study group on alternative defence concepts for Italy set up by the Florence Forum on the Problems of Peace and War. He is the author of many papers on technical issues regarding nuclear weapons and military activities in space.

William F. Gutteridge (British) is Professor Emeritus in International Studies at the University of Aston in Birmingham. He was formerly Senior Lecturer in Commonwealth History and Government at the Royal Military Academy, Sandhurst. He is author of four books relating to the armed forces in new states, with particular reference to Africa. He is editor of European Security; Nuclear Weapons and Public Confidence; and co-editor of The Dangers of New Weapons Systems.

Ernst W. Hamburger (Brazilian) is Professor of Experimental Physics at the University of São Paulo. He is author of numerous research papers on nuclear physics and on problems of education. He has served as Director of the Sociedade Brasileira de Fisica.

Robert d’A. Henderson (Canadian) is Assistant Professor of International Relations a t the University of Western Ontario. He has also held appointments at the National University of Lesotho and at the University of Ife. He has published articles in various journals, including The World Today, Orbis and Journal of Modern African Studies.

Catherine M. Kelleher (VS) is Director of the Maryland International Security Project at the University of Maryland. She holds a Ph.D degree in Political Science from the Massachusetts Institute of Technology. Her governmental experience includes serving on the staff of tbc National Security Council. She is author of Germany and the Politics of Nuclear Weapons; and of numerous other publications in the field of International Security.

Robert W. Malcolmson (Canadian) is Professor of History at Queen’s University, Kingston, Ontario. He is author of Nuclear Fallacies: How We Have Been Misguided Since Hiroshima, and of several publications on English Social History.

Robert Neild (British) is Professor Emeritus of Economics at the University of Cambridge and a Fellow of Trinity College, Cambridge. He served in the British Cabinet Office and Treasury between 1951 and 1956. He is author of How to Make Up Your Mind about the Bomb; and of numerous publications in the field of Economics.

Andrea Ottolenghi (Italian) is a physicist based at the University of Milan, where he is a member of the Research Group on Nuclear Weapons and Arms Control. Dr Ottolenghi has published extensively on the effects of nuclear war.

Qian Xuefeog (Chinese) is based at the Institute of International Studies in Beijing.  He has also been a Visiting Study Fellow in International Relations at tbc University of Oxford.

Carlo Schaerf (Italian) (co-editor) is Professor of Physics at the University of Rome I. He was previously a Research Associate at Stanford University and on the staff of the Italian Atomic Energy Commission. With Professor Eduardo Amaldi he founded in I 966 the International School on Disarmament and Research on Conflicts (ISODARCO). He was appointed Director of ISODARCO in 1970. He is co-editor of nine previous volumes in this series.

Dietrich Schroeer (US) is Professor of Physics in the Department of Physics and Astronomy at the University of North Carolina, Chapel Hill. He is author of Physics and its Fifth Dimension: Society; of Science, Technology and the Nuclear Arms Race; and of a resource bibliography on physics and the arms race in American Journal of Physics, September 1982.

Jane M. O. Sharp (British) is based at the Stockholm International Peace Research Institute. She was formerly Resident Scholar on the Peace Studies Program at Cornell University. She has published articles on European security and arms control themes in such journals as Bulletin of the Atomic Scientists; Arms Control; International Security; and International Affairs. She is author (with David Holloway) of The Warsaw Pact: Alliance in Transition?

Shu Yuan H. Chang (US) is Professor of International Law at the North-West Institute of Political Science and Law at Xianin the People’s Republic of China. She has also taught in Lesotho, the United States and Taiwan. She has published widely on Chinese themes.

Maria Clelia Spreafico (Italian) has recently completed a thesis al the University of Rome on the history of alternative defence concepts, in particular civilian-based defence. She has been active in the Italian Peace Movement, is a promoter of the Centro Studi Difesa Civile in Rome, and is a member of the study group on alternative defence concepts for Italy set up by the Florence Forum on the Problems of Peace and War.

K. Subrahmanyam (Indian) is Director of the Institute for Defence Studies and Analyses in New Delhi. He was Chairman of the United Nations Study Group on Deterrence, 1985-6. He has published extensively on defence and development issues and, in particular, on Indian security perspectives.

Olga Šuković (Yugoslav) is Senior Researcher at the Institute of International Politics and Economics in Belgrade. She has also been a Resident Fellow at the Institute for East-West Security Studies, New York. She has published widely on international security issues with particular reference to the United Nations.

Kosta Tsipis (VS) is Professor of Physics and Director of the Program in Science and Technology for lnternational Security at the Massachusetts Institute of Technology. He is author of three books, co-editor of seven further books and author of 68 articles on international security issues.