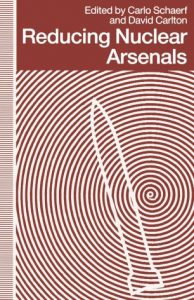 PART I THE STRATEGIC NUCLEAR ARSENALS OF THE SUPERPOWERS

The Future of the Global Strategic Balance
Desmond Ball

The Future Use of Redundant Weapon-grade Material
Edoardo Amaldi

The French Nuclear Force in the Era of Negotiations
Jean Klein

Conventional and Nuclear Forces in Europe: The Importance of the Vienna Talks
Jonathan Dean

Deterrence or Disarmament: NATO Must Cope with the Debate
Antonia Handler Chayes and Caroline R. Russell

The Lance Saga: A Us-NATO Debate on the Modernisation of Theatre Nuclear Weapons
Marco De Andreis

Edoardo Amaldi (Italian) was Professor of Physics at the University of Rome for 41 years. He also served as President of the Accademia Nazionale dei Lincei, and played a leading role in the establishment of the European Centre for Nuclear Research (CERN). He was Founder and President of the International School on Disarmament and Research on Conflicts (ISODARCO). He died on 5 December 1989.

Luigi Anderlini (Italian) was first elected to the Italian Parliament in 1958 as a Communist. In the 1960s be helped to found the Autonomous Socialist Movement. He then became associated with the Independent Left, serving as President of its Parliamentary Group from 1976 to 1983. In 1987 he retired from Parliament.

Alexei G. Arbatov (Soviet) is Head of the Department on Disarmament and International Security at the Institute of World Economy and International Relations (IMEMO) in Moscow. He holds a PhD in Political Science. He is consultant to the Ministry of Foreign Affairs in the Soviet Union.

Desmond Bali (Australian) has been Head of the Strategic and Defence Studies Centre at the Australian National University, Canberra since 1984. From 1979 to 1980 he was Research Associate at the International Institute for Strategic Studies. He is the author of Politics and Force Levels: The Strategic Missile Program of the Kennedy Administration.

Sir Hugh Beach (British) has been Director of the Council for Arms Control in London since 1986. For forty years he was an officer in the British Army (Royal Engineers), his last service post being Master General of the Ordnance in charge of procurement of all land service equipment for the British Army.

Paul S. Brown (US) has worked since 1966 in the Lawrence Livermore Laboratory, where he is at present Assistant Director for Arms Control. During 1986 he served as US Department of Energy Delegate to the Nuclear Test Experts Meeting held in Geneva.

Francesco Calogero (Italian) is Secretary-General of the Pugwash Conferences on Science and World Affairs. He is also Professor of Theoretical Physics at the University of Rome ‘La Sapienza’.  He serves as a member of the Governing Board of the Stockholm International Peace Research Institute.

David Carlton (British) (co-editor) is Lecturer in International Studies at the University of Warwick. He is the author of Anthony Eden: A Biography and Britain and the Suez Crisis; and co-editor of The Nuclear Arms Race Debated and The Cold War Debated.

Antonia Handler Chayes (US) is Chairman of Endispute Inc. She is an Adjunct Lecturer at Harvard University and an Adjunct Professor at Georgetown University. She served as Under Secretary of the US Air Force from 1979 to 1981 and as Assistant Secretary of Defense for Manpower and Reserve Affairs from 1977 to 1979. She co-edited (with Paul Doty) Defending Deterrence: Managing the ABM Treaty Regime into the 21st Century.

Cui Liru (Chinese) is a Research Fellow and Deputy Director of the Division for North American Studies of the China Institute of Contemporary International Relations (CICIR) in Beijing.

Jonathan Dean (US) is Arms Control Adviser of the Union of Concerned Scientists. From 1973 to 1981 be was Deputy Head and then Head of the US Delegation to the Vienna-based NATO­ Warsaw Pact negotiations on Mutual and Balanced Force Reductions. He is author of Meeting Gorbachev’s Challenge, a study of the negotiations on Conventional Forces in Europe.

Marco De Andreis (Italian) is a specialist in international security and arms control. He currently works in the Rome Office of the Pugwash Conferences on Science and World Affairs.

Richard L. Garwin (US) is a physicist at the IBM T. J.  Watson Research Center, Yorktown Heights, New York. He played a part in building the hydrogen bomb and has been active in the design and evolution of strategic and military systems. He is a long-time adviser to the US Government.  He is Adjunct Professor of Physics at Columbia University and has been Professor of Public Policy at Harvard University.

Carlo Jean (Italian) is a Major-General in the Italian Army. He is Director of the Centro Militare Studi Strategici, and Professor of Strategic Studies in the Free International University of Social Studies in Rome.

Catherine M. Kelleher (US) is Professor and Head of the National Security Studies Concentration in the School of Public Affairs at the University of Maryland. She holds a PhD in Political Science from the Massachusetts Institute of Technology. Her governmental experience includes serving on the staff of the National Security Council. She is the author of Germany and the Politics of Nuclear Weapons and of numerous other publications in the field of International Security.

Jean Klein (French) is Director of Research at the Centre National de la Recherche Scientifique and is attached to the French Institute for International Relations (IFRI) in Paris. He teaches at the Sorbonne and at the Military School of St Cyr. He holds a doctorate from the Faculty of Law in Nancy. He has published extensively in French.

L. Masterkov (Soviet) is a member of the Soviet Delegation to the Strategic Arms Reduction Talks in Geneva.

Alessandro Pascolini (Italian) is Associate Professor of Mathematical Methods of Physics in the Physics Department of the University of Padua. His researches deal with problems of theoretical nuclear physics and non-linear phenomena. He is Secretary of the International School on Disarmament and Research on Conflicts (ISODARCO) and of the ltalian Pugwash Group.

Caroline R. Russel (US) received her Master’s degree in Soviet Politics from London School of Economics and Political Science in 1987. She has worked with Antonia Handler Chayes on a variety of projects. Her report on an Aspen Strategy Group Conference on ‘Gorbachev’s Military and NATO Security’ is to be published shortly.

Carlo Schaerf (Italian) (co-editor) is Professor of Physics at the University of Rome ‘Tor Vergata’. He was previously a Research Associate at Stanford University and on the staff of the Italian Atomic Energy Commission. With Professor Edoardo Amaldi he founded in 1966 the International School on Disarmament and Re­ search on Conflicts.

Elmar Schmähling (German) entered the West German Navy in 1957 and rose to be a Rear Admiral, serving as Chief of Office for Studies and Exercises. He has published widely on security policy issues.

Cesare Silvi (Italian) has been with the Italian Commission for Nuclear and Alternative Energies since 1975. Until 1981 he was attached to the Nuclear Safety and Health Protection Directorate and since 1982 he has been Head of the Promotion Unit of the International Affairs Directorate. He was a Resident Fellow at the Institute for East-West Security Studies in New York during 1986-7.