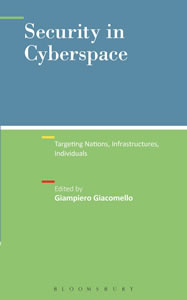 Today, the Internet has become a source of information that no country or company can forgo. It is not only used to communicate or entertain, but most importantly to operate utilities and public services such as banking or air traffic. As the reliance on computer networks across societies and economies keeps growing, so do security risks in cyberspace – referred to as “cybersecurity.”
Cybersecurity means protecting information and control systems from those who seek to compromise them. It also involves actors, both malicious or protective, policies and their societal consequences. This collection of essays provides a better understanding of the risks, perceptions, and myths that surround cybersecurity by looking at it from three different levels of analysis: the sovereign state, the infrastructure and stakeholders of the Internet, and the individual. The essays explore such issues as information ownership, censorship, cyberwars, cyberterrorism, privacy, and rebellion, bringing together expert knowledge from computer science and the social sciences with case studies. It reviews existing policies and practices and discusses the threats and benefits of living in an increasingly networked world. This authoritative analysis of one of the most controversial and compelling security debates of the twenty-first century will appeal to scholars and practitioners interested in security, international relations and policymaking.

The ‘State(s)’ of Cybersecurity
Rossella Mattioli

Francesco Giacomini, IT Specialist, Italian National Institute of Nuclear Research
Francesco Giacomini is an IT Specialist at the Italian National Institute of Nuclear Research, with 15 years of experience in software engineering, high-performance computing and large-scale distributed computing.  His main interests cover the technologies at the base of security systems and how they could help in defining better policies for the governance of the Internet.

Chunmei Kang, Associate Professor, China Academy of Engineering Physics
Chunmei Kang earned her PhD degree in the field of nuclear materials and is currently Associate Professor with the China Academy of Engineering Physics. Dr Kang has worked in the field of Arms Control for more than ten years and her research fields include nuclear strategy, arms control verification technology and non-proliferation issues. Cyberspace is a new field that she interested in, as cyberspace security is becoming more and more important to national security strategy. She is a co-author of Nuclear Capability of Countries and Areas around China (published by Atomic Energy Press) and English -Chinese Chinese-English Nuclear Security Glossary (also by Atomic Energy Press).

Andreas Kuehn, Fulbright Scholar, School of Information Studies at Syracuse University, New York
Andreas Kuehn is a PhD candidate and Fulbright Scholar at the School of Information Studies at Syracuse University, Syracuse, New York. His research areas include Internet Governance, Information Policy, and Science and Technology Studies. His current work focuses on the use of deep packet inspection in online copyright enforcement, behavioral targeting and cyber­ security and its effects on Internet governance. He has worked in various research and technology policy roles for the Austrian Ministry of Finance, the Swiss E-Government-Institute, the Swiss OFCOM, and the Malaysian National Advanced IPv6 Centre of Excellence. He holds an MSc in Information Systems from the University of Zurich.

Bruce D. Larkin, Professor Emeritus, University of California at Santa Cruz
Bruce D. Larkin is Professor Emeritus of Politics at the University of California at Santa Cruz, where he has lectured on war and disarmament, Chinese politics and foreign policy, and internet governance. He is author of Nuclear Designs: Great Britain, France, and China in the Global Governance of Nuclear Arms (1996), War Stories (2001), and Designing Denuclearization: An Interpretive Encyclopedia (2008). His current work on weapons denuclearization can be followed at www.gcdd.net. A more extensive résumé is available at www.brucelarkin.net.

Rossella Mattioli, Security and Resilience of Communication Networks Officer at the European Union Agency for Network and Information Security (ENISA)
Rossella Mattioli holds a MSc in Engineering specializing in Cybersecurity at the Tallinn University of Technology in Estonia and BA in Communications Sciences at the University of Modena and Reggio Emilia, Italy. Before focusing on Internet security and resilience, she was the intranet manager of a major Italian financial group where she dealt with network governance on an enterprise level for nine years. Her independent research includes incident information exchange, transnational incident management, Internet global operational security and governance issues related to critical information infrastructures. She is now Security and Resilience of Communication Networks Officer at the European Network and Information Security Agency (ENISA).

Milton Mueller, Professor, Syracuse University School of Information Studies, New York
Milton Mueller is Professor at Syracuse University School of Information Studies. He has conducted research on the political economy of telecommunications and the Internet for 25 years. His widely read book Ruling the Root: Internet Governance and the Taming of Cyberspace (MIT Press, 2002) provided the first scholarly account of how the battles over domain names led to an institutional innovation known as ICANN. His newest book, Networks and States: The Global Politics of Internet Governance (MIT Press, 2010) is a historical and theoretical challenge to the territorial nation-state’s control of communication ­ information policy. He has been active in ICANN, the regional Internet address registries, the World Summit on the Information Society, and the Internet Governance Forum. He received his PhD from the University of Pennsylvania, Annenberg School, in 1989. From 2008-11 he held the XS4All Chair on the Security and Privacy of Internet Users at the Technology University of Delft, the Netherlands.

Patryk Pawlak, Senior Analyst, EU Institute for Security Studies in Paris
Patryk Pawlak is a Senior Analyst at the EU Institute for Security Studies in Paris where he deals with internal security policies of the EU, including cyber­ security. He holds a PhD in Political Science from the European University Institute in Florence. Prior to joining the EUISS, he was a visiting scholar at numerous research institutions in Europe and in the United States. Dr Pawlak has published extensively in numerous peer-reviewed journals and contributed to several collective research and publication projects on European foreign and security policies, including on transatlantic homeland security and data protection co-operation.

Judith V. Reppy, Professor, Cornell University
Judith V. Reppy, PhD, is Professor Emerita in the Department of Science and Technology and Studies and a Graduate School Professor at Cornell University. She is also a former Director and Associate Director of the Peace Studies Program (now the Judith Reppy Institute for Peace and Conflict Studies). She has been a visiting fellow at the Science Studies Unit (Edinburgh University), Science and Technology Studies (Manchester University), the Science Policy Research Unit (Sussex University), and the Center for International Studies (MIT). She was co-chair of US Pugwash from 1995-2000 and in 2002-3 served on the National Academy of Sciences’ Committee on Research Standards and Practices to Prevent the Destructive Application of Biotechnology (‘the Fink Committee’). Dr Reppy’s current research interests include dual-use technology, export control policy, and the impact of WikiLeaks on journalism and on diplomatic practices. Her most recent book is Getting to Zero: The Path to Nuclear Disarmament (Stanford University Press, 20 11), co-editor (with Catherine Kelleher) and author.