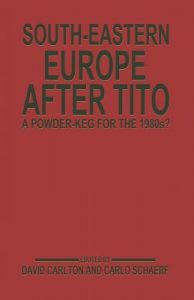 Great Power Spheres-of-Influence in the Balkans: 1944 and After
David Carlton

Socialist Countries and Some Problems of the Eastern Mediterranean
György Reti

Towards Security and Stability in the Balkans: the Role of Economic Co-operation
Nansen Behar

Nansen Behar (Bulgarian) is Head of the Economics Department of the Institute for Contemporary Social Studies in the Bulgarian Academy of Sciences. He was formerly Editor-in-Chief of the magazine International Life (Sofia). He is author of numerous books and articles published in a number of different languages.

David Carlton (British) (co-editor) is Senior Lecturer in Diplomatic History at the Polytechnic of North London. He holds a Ph.D. degree from the University of London. He is author of MacDonald versus Henderson: The Foreign Policy of the Second Labour Government (1970); of Anthony Eden: A Biography (1981); and of numerous articles on modern international politics. He is co-editor of six previous volumes in this series.

William F. Gutteridge (British) is Professor of International Studies and Head of Political and Economic Studies Group at the University of Aston in Birmingham. He was formerly Senior Lecturer in Commonwealth History and Government at the Royal Military Academy, Sandhurst. He is author of Armed Forces in New States (1962); Military Institutions and Power in the New States (1965); The Military in African Politics (1969); and Military Regimes in Africa (1975).

Giacomo Luciani (Italian) is Director of Research at the Istituto Affari Internazionali in Rome. He is author of three books in Italian on international politics. He has also contributed an article in English entitled ‘Detente and the New Order: A Difficult Juncture’ to Lo Spettatore Internazionale, no. 1, 1980.

Daniele Mora (Italian) is an official of the Italian Socialist Party in Rome. He is currently in the Party’s International Department. He has also served in Brussels and London on European Economic Community business. He has published many articles on international politics and has also appeared on radio and television both in Italy and abroad.

Athanassios G. Platias (Greek) is a Fellow of the Peace Studies Program at Cornell University. He is registered as a Ph.D. candidate in the Department of Government at the same university. He was formerly a Fellow at the Center for Science and International Affairs, Harvard University. He is a graduate of the Law Faculty of the University of Athens.

György Réti (Hungarian) is a Researcher at the Hungarian Institute for Foreign Affairs in Budapest. He was formerly a Hungarian diplomat, seeing service in Peking, Tirana and Saigon. He has written several articles on Hungarian-Italian relations. He is also author of a book in Hungarian on Albania: Mit kell Tudni Albániáról? (Budapest, 1981).

R. J. Rydell (US) is a political scientist at the Lawrence Livermore National Laboratory and is currently studying the causes and effects of the proliferation of nuclear weapons. He was previously a Research Fellow at the Center for Science and International Affairs at Harvard University. He was educated at the University of Virginia (B.A.), the London School of Economics (M.Sc.), and Princeton University (M.A. and Ph.D.). His doctoral dissertation, entitled ‘Decision Making on the Breeder Reactor in Britain and the United States’ will be published as a book.

Carlo Schaerf (Italian) (co-editor) is Professor of Physics at the University of Rome. He was formerly a Research Associate at Stanford University and on the staff of the Italian Atomic Energy Commission. With Professor Eduardo Amaldi he founded in 1966 the International School on Disarmament and Research on Conflicts (ISO DARCO). He was appointed Director of ISODARCO in 1970. He is co-editor of six previous volumes in this series.

Kosta Tsipis (US) is Associate Director of the Program in Science and Technology for International Security at the Massachusetts Institute of Technology. He was previously associated with the Stockholm International Peace Research Institute. He is author of three books and 42 articles on international security themes.

Ciro E. Zoppo (US) is Professor of International Relations in the Political Science Department, University of California, Los Angeles. He is a former Executive Director of the California Seminar on Arms Control and Foreign Policy. He has contributed numerous articles on Mediterranean problems and on arms control to such journals as Survival and World Politics.