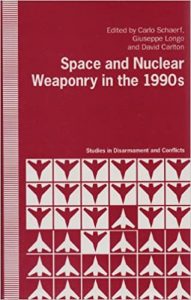 Not What the Strategists had in Mind: Arms Control and American Security
Michael Nacht
Introduction
What is Arms Control and Who Says So?
Personalities, Domestic Politics and the Sense of History

Luciano Anselmo (Italian) is on the Research Staff of the Spaceflight Dynamics Section of the National Computing Centre of the Italian Research Council in Pisa. He has been involved in supporting several space missions.

David Carlton (British) (co-editor) is Lecturer in International Studies at the University of Warwick. He is author of Anthony Eden: A Biography and of Britain and the Suez Crisis. He is co-editor of eleven previous volumes in this series.

Cheng Dongquan (Chinese) is a Professor at the Institute of Applied Physics and Computational Mathematics in Beijing. He is currently engaged in studies of laser theory.

Dorinda G. Dallmeyer (US) is Research Director at the Dean Rusk Center for International Comparative   Law, University of Georgia, Athens, Georgia. She is editor of The Strategie Defense Initiative: New Perspectives on Deterrence.

David W. Doro (US) is Principal Deputy on the Treaty Verification Pro­ gram of the Lawrence Livermore National Laboratory. He has served as Advisor to the US Department of Energy and as a US Delegate to the Conference on Disarmament.

Paolo Farinella (Italian) is a Researcher in Astrophysics and Celestial Mechanics at the University of Pisa.  He is co-author of a report on alternative defence concepts and the role of Italy commissioned by the Italian Ministry of Defence.

Huang Zhen (Chinese) is a staff member of the Chinese People’s Association for Peace and Disarmament. She was awarded a Bachelor of Arts degree by Anhui University in 1985.

Hu Side (Chinese) is Deputy Director of the Institute of Applied Physics and Computational Mathematics in Beijing. Professor Hu is a specialist on problems of verification.

Gerald W. Johnson (US) is an Adjunct Professor at the University of California’s Institute on Global Conflict and Cooperation. He was formerly Associate Director for nuclear-weapon testing at Lawrence Livermore National Laboratory.

Liu Gongliang (Chinese) is a Professor at the Institute of Applied Physics and Computational Mathematics in Beijing.

Liu Huaqiu (Chinese) is a Senior Fellow on the Commission on Science, Technology and Industry for National Defence in Beijing. He is author of China and the Neutron Bomb (1988).

Giuseppe Longo (Italian) (co-editor) is Professor of Physics at the University of Bologna. He is also a member of the Executive Board of the university’s interdepartmental Research Centre for Peace.

Michael Nacht (US) is Professor of Public Policy and Dean of the School of Public Affairs at the University of Maryland. He was previously Associate Director of the Center for Science and International Affairs at Harvard University. He was founding co-editor of International Security.

Pan Zhenqiang (Chinese) is Deputy Director of the Institute for Strategie Studies at the National Defence University in Beijing.

Yuri Pinchukov (Soviet) is Head of the Section of General Problems of Disarmament at the Institute of World Economy and International Relations in Moscow. He formerly conducted research at the Kurchatov Institute of Atomic Energy and at the Space Research Institute of the Soviet Academy of Sciences.

Carlo Schaerf (Italian) (co-editor) is Professor of Physics at the second University of Rome, ‘Tor Vergata’. He was previously on the staff of the Italian Atomic Energy Commission. With Professor Edoardo Amaldi he founded in 1966 the International School on Disarmament and Research on Conflicts. He is co-editor of eleven previous volumes in this series.

Frank von Rippel (US) is Professor of Public and International Affairs at Princeton University. He is Chairman of the Board of Editors of Science and Global Security.