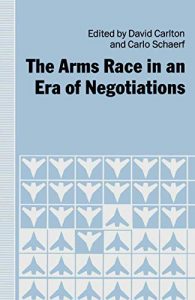 The Logic of Nuclear Strategy: The US Orientation to Counterforce
Earl C. Ravenal

The Quest for International Disarmament and the Role of Second-Rank Nuclear-Weapon States
Huang Tinwei, Li Yiyan and Wang Ling

Stability and Verifiability of the Nuclear Balance after Deep Reductions
Harold A. Feiveson and Frank von Hippel

The Future of Relations between Eastern and Western Europe
Heinrich Siegmann

Dimitri Batani (Italian) is engaged on preparing a doctoral dissertation in Physics at the University of Pisa. He is a member of the Italian Union of Scientists for Disarmament and of the Study Group on Alternative Security Options for Italy.

David Carlton (British) (co-editor) is Lecturer in International Studies at the University of Warwick. He is author of MacDonald versus Henderson: The Foreign Policy of the Second Labour Government; of Anthony Eden: A Biography; of Britain and the Suez Crisis; and of numerous articles on modern international politics. Dr Carlton is coeditor of ten previous volumes in this series.

Cui Liru (Chinese) is Deputy Head of the Division for North America Studies at the China Institute of Contemporary International Relations in Beijing.

Paolo Farinella (Italian) is working on space physics and planetary science at the University of Pisa. He has published extensively on astronomy and has also contributed to previous ISODARCO volumes. He is currently engaged on a study, commissioned by the Italian Ministry of Defence, of alternative defence concepts and the role of Italy.

Harold A. Feiveson (US) is Research Policy Analyst with the Program on Nuclear Policy Alternatives at Princeton University’s Center for Energy and Environmental Studies. He was formerly a policy analyst in the Science Bureau of the US Arms Control and Disarmament Agency. He is Editor of Science and Global Security.

V. I. Goldanskii (Soviet) is based at the Institute of Chemical Physics of the Soviet Academy of Sciences (of which he has been a full member since 1981). He has been a member of the Council of the Executive Committee of the Pugwash Conferences on Science and World Affairs since 1987. He holds the Order of Lenin and other Soviet decorations; and is honorary member of numerous Academies of Sciences throughout the world.

Huang Tinwei (Chinese) is Head of the Divison for Comprehensive Studies at the China Institute of Contemporary International Relations in Beijing.

Michael D. Maden (US) is Assistant Professor of Political Science at Casson-Newman College, Tennessee. He has been a Visiting Lecturer in International Relations and Comparative Politics at California State University, San Bernardino. He was awarded a doctorate by the University of California, Davis.

Earl C. Ravenal (US) is Distinguished Research Professor of International Affairs at the Georgetown University School of Foreign Service; and a Senior Fellow at the Cato Institute, Washington, D.C. A former official in the Office of the US Secretary of Defense, he is author of nine books and numerous articles on US foreign and military policy and on international politics.

Carlo Schaerf (Italian) (co-editor) is Professor of Physics at the University of Rome Tor Vergata. He was previously a Research Associate at Stanford University and on the staff of the Italian Atomic Energy Commission. With Professor Edoardo Amaldi he founded in 1966 the International School on Disarmament and Research on Conflicts (ISODARCO). He was appointed Director of ISODARCO in 1970. He is co-editor of ten previous volumes in this series.

Jane M. O. Sharp (British) is a Senior Researcher at the Stockholm International Peace Research Institute where she is directing a project exploring alternative European futures. She was formerly a researcher at Cornell and Harvard Universities. She has published articles on European security and arms control themes in such journals as Bulletin of the Atomic Scientists; Arms Control; International Security; and International Affairs. She is author (with David Holloway) of The Warsaw Pact: Alliance in Transition?

Heinrich Siegmann (West German) is a researcher at the Deutsch Amerikaniches Institut in Freiburg. He was formerly a Co-Director of the research programme on stability-orientated security and defence policy in the Max Planck Society, Starnberg. In 1976 he was awarded a M.Sc. degree in Computer Science by the University of Colorado; and in 1983 he obtained a Doctorate in Political Science at the Massachusetts Institute of Technology.

Kosta Tsipis (US) is Director of the Program in Science and Technology for International Security at the Massachusetts Institute of Technology. He holds a Ph.D. from Columbia University. He is author of three books, co-editor of seven further books and author of more than sixty scientific papers.

Richard H. Ullman (US) is the David K. E. Bruce Professor of International Affairs at the Woodrow Wilson School of Public and International Affairs of Princeton University. He has been a Rhodes Scholar at the University of Oxford; a member of the Department of Government at Harvard University; and a Visiting Fellow at the International Institute for Strategic Studies. He has also served on the staff of the US National Security Council and in the Office of the Secretary of Defense. He is author of a three-volume study, Anglo-Soviet Relations 1917-1921.

Frank von Hippel (US) is a physicist who is Professor of Public and International Affairs at the Center for Energy and Environmental Studies at Princeton University. He is Co-Chairman of the Editorial Board of Science and Global Security.

Wang Ling (Chinese) is Associate Research Fellow at the China Institute of Contemporary International Relations in Beijing.
Zhang Jianzhi (Chinese) is Senior Researcher at the Centre for International Studies under the State Council of Chiria in Beijing. A graduate of the Beijing Aviation Institute, he formerly served as a researcher on science and technology for national defence. He has published widely in Chinese on strategic issues including the possible militarisation of space.

Mario Zucconi (Italian) is Director of US and Western Alliance Studies at the Centro Studi di Politica Internazionale in Rome. He has been a Visiting Professor at the University of Naples and at the Woodrow Wilson School of Public and International Affairs of Princeton University. He was co-editor (with Richard H. Ullman) of Western Europe and the Crisis in US-Soviet Relations; and has published extensively in Italian.