Studies in Disarmament and Conflicts 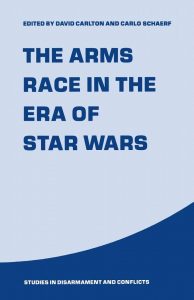 PART I THE INTERNATIONAL SECURITY CONTEXT

On Peace and Security: How to Disregard the Real Problems
Hylke Tromp

The Impact of Rearmament on the American Economy
Massimo Pivetti

A Policy of Military Détente in Europe
Sverre Lodgaard

Bruno Bertotti (Italian) is Professor of Nuclear and Theoretical Physics at the University of Pavia. He contributed to Joseph Rotblat and Alessandro Pascolini (eds), The Arms Race at a Time of Decision.

David Carlton (British) (co-editor) is Senior Lecturer in History at the Polytechnic of North London. He is author of MacDonald versus Henderson: the Foreign Policy of the Second Labour Goverment and of Anthony Eden: A Biography. He is co-author of The Nuclear Arms Race Debated and co-editor of eight previous volumes in this series.

Matthew A. Evangelista (US) teaches Soviet and world politics at the University of Michigan, Ann Arbor. He was previously a Fellow in the Department of Government at Cornell University. He has contributed articles to International Security; World Politics; and World Policy Journal.

Paolo Farinella (Italian) is based in the Department of Mathematics at the University of Pisa. He was formerly at the Astronomical Observatory of Brera, Milan. He has published around fifty articles in scientific journals on astronomy, celestial mechanics and planetary science.

William F. Gutteridge (British) is Professor Emeritus in International Studies at the University of Aston in Birmingham. He was formerly Senior Lecturer in Commonwealth History and Government at the Royal Military Academy, Sand hurst. He is author of four books relating to the armed forces in new states, with particular reference to Africa. He is editor of European Security, Nuclear Weapons and Public Confidence and co-editor of The Dangers of New Weapons Systems.

Bhupendra Jasani (British) has been a Research Fellow at the Stockholm International Peace Research Institute since 1972. Between 1979 and 1981 he served as technical consultant to the UN Group of Governmental Experts studying the territorial, legal and financial implications of an International Satellite Monitoring Agency. Dr Jasani’s numerous publications include Outer Space – Battlefield of the Future?

Sverre Lodgaard (Norwegian) is engaged on a research project on European security and disarmament under the auspices of the Stockholm International Peace Research Institute. He is a consultant to the Norwegian Government on Arms Control and Disarmament.

Peri Pamir (Turkish) is based at the Graduate Institute for International Studies in Geneva where she is preparing a doctoral thesis on the origins of the Turkish-American Alliance, 1945-7. She holds a BA degree from the University of London and an MA degree from the University of Chicago. She serves as a part-time assistant to the Secretary-General of the Pugwash Conferences on Science and WorId Affairs.

Massimo Pivetti (Italian) is Professor of Political Economy at the University of Naples. He specialises in armament economics; balance of payment constraints; and the theory of distribution. He has contributed to The Cambridge Journal of Economics; Political Economy; and Studies in the Surplus Approach.

Joseph Romm (US) is Research Assistant to Dr Kosta Tsipis in the Program in Science and Technology for International Security at the Massachusetts Institute of Technology. He has contributed articles to La Recherche; Physics in Canada; and the Boston Globe.

Carlo Schaerf (Italian) (co-editor) is Professor of Physics at the University of Rome I. He was previously a Research Associate at Stanford University and on the staff of the Italian Atomic Energy Commission. With Professor Eduardo Amaldi he founded in 1966 the International School on Disarmament and Research on Conflicts (ISODARCO). He was appointed Director of ISODARCO in 1970. He is co-editor of eight previous volumes in this series.

Dietrich Schroeer (US) is Professor of Physics in the Department of Physics and Astronomy at the University of North Carolina, Chapel Hill. He is author of Physics and its Fifth Dimension: Society; of Science, Technology and the Nuclear Arms Race; and of a resource bibliography on physics and the arms race in American Journal of Physics, September 1982.

Jane M. O. Sharp (British) is a Peace Fellow at the Bunting Institute, Harvard University. She was formerly Resident Scholar on the Peace Studies Program at Cornell University. She has published articles on European security and arms control themes in such journals as Bulletin of the Atomic Scientists; Arms Control; and International Security.

Herbert F. York (US) is Director of the Institute on Global Conflict and Co-operation, the University of California. He was one of the nuclear scientists who developed the atomic bomb. He subsequently held numerous posts in the fields of defence and arms control under a variety of US Presidents. He is author of Race to Oblivion: A Participant’s View of the Arms Race and The Advisers: Oppenheimer, Teller and the Superbomb.

Boguslaw W. Zaleski (Polish) is Associate Professor at the Institute of International Relations, Department of Journalism and Political Science, Warsaw University. He holds a PhD degree in political science. He is author of around thirty articles on international relations and has written a book on The Politics and Ideology of the Third World.