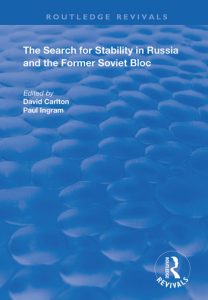 First published in 1997, this volume consists of chapters placed before a series of meetings organised by the Rome-based international School on Disarmament and Research on Conflicts (ISODARCO) which reviewed the prospects relating to the countries of the Former Soviet Union and of the other members of the Warsaw Treaty Organization.

The authors include Western experts, as well as distinguished commentators from Russia itself. Among the latter are Georgi Arbatov, Ruslan Khasbulatov and Alexei Arbatov.

An earlier volume of chapters deriving from this same series of meetings was still in print at the time of original publication in 1997, namely Rising Tension in Eastern Europe and the Former Soviet Union.

List of Abbreviations
Notes on the Contributors
Preface by Carlo Schaerf

Dancing on the Edge of the Chasm: The Struggle for Survival in the Former Soviet Union
Derek Braddon

The Present State and Future of Science in Russia
S.P. Kapitza

NATO Enlargement and Russian Policy in the 1990s
Alexander Nikitin

A Co-Operative Security Approach to Addressing Instabilities in Eastern Europe: The Role Of NATO
Lamberto Zannier

The Role of Memory and Identity in the Process of Change, with Special Reference to the Former Soviet Union and Eastern Europe: Psychological Perspectives
Rita R. Rogers

Alexei Arbatov (Russian) is a Member of the Russian Duma and Deputy Chairman of its Defence Committee. He is also associateci with the Institute of World Economy and International Relations, Moscow.

Georgi Arbatov (Russian) is Director Emeritus of the Institute for the USA and Canada, Moscow, as well as a member of the Russian Academy of Sciences. He is author of The System: An Insider’s Life in Soviet Politics.

Derek Braddon (British) is Research Director at the Research Unit in Economics, University of the West of England, Bristol.

David Carlton (British) (ca-editor) is Lecturer in International Studies at the University of Warwick. He is author of Anthony Eden: A Biography and of Britain and the Suez Crisis. He is co­ editor of 14 previous volumes in this series.

Herman De Fraye (Belgian) is Director of Protocol and External Relations for the Belgian Senate, Brussels.

Victor Gilinsky (US) is a former Commissioner of the US Nuclear Regulatory Commission.

Paul Ingram (British) (co-editor) is a Researcher at the Oxford Research Group and an Oxford City Councilor. He is conducting postgraduate research in the Department of Politics and International Studies, University of Warwick.

Ruslan Khasbulatov (Russian) is a former Chairman of the Supreme Soviet, Moscow. He is now associated with the Plekhanov Institute, Moscow.

Sondra Z. Koff (US) is Professor of Political Science at the State University of New York at Binghampton.

Alexander Nikitin (Russian) is Director of the Centre for Political and International Studies, Moscow. He previously served with the Soviet Permanent Mission to the United Nations in New York.

Andrus Park (Estonian), now deceased, was a member of the Division of Humanities and Social Studies in the Estonian Academy of Science, Tallinn.

Rita R. Rogers (US) is Professor of Clinical Psychiatry at the University of California Medical School, Los Angeles.

Alexei Vasilyev (Russian) is Director of the Institute for African Studies, Moscow.

Lamberto Zannier (Italian) is Deputy Head of the Italian Delegation to the Organization for Security and Cooperation in Europe. He was formerly Head of Department, Arms Control and Co-operative Security Section, Political Affairs Division at NATO, Brussels.