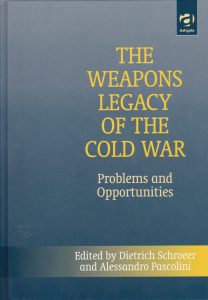 Preface
Notes on the Contributors
Introduction

The Future of High Technology in Military Affairs
Dietrich Schroeer

The Impact of the Military-Industrial Complex on Society
Gert G. Harigel

A Nuclear Weapon-free World: Is it Desirable? Is it Possible? Is it Probable?
Francesco Calogero

The New Verification Game and Technologies at our Disposal
Patricia Lewis

Georgi Arbatov (Russia) is the Director of the Institute for the USA and Canada, as well as a member of the Russian Academy of Science. He is the author of The System:An Insider’s Life in Soviet Politics.

Eric Arnett (USA) is leader of the Project on Military Technology at the Stockholm International Peace Research Institute. He is the author of the annual chapter on ‘Military Research and Development’ in the Sf PR/ Year­ book, as well as editor of Nuclear Weapons after the CTB and Military Capacity and the Risk of War

Oleg Bukharin (Russia) works on arms control issues at the Moscow Institute of Physics and Technology, and at Princeton University where he is currently a staff member of the Program on Nuclear Policy Alternatives.

Francesco Calogero (Italy) is Professor of Theoretical Physics, University of Rome I “La Sapienza”. He is currently on leave while serving as Secretary General, Pugwash Conferences on Science and World Affairs. Together with M. de Andreis he has recently published a SIPRI Research Report, The Soviet Nuclear Weapons Complex.

Anatoli S.Diakov (Russia) is Professor of Physics at the Moscow Institute of Physics and Technology where, together with Frank von Hippe!, he has established the Center for Arms Control, Energy and Environmental Studies. His current activities include work on plutonium disposition, transparency and nuclear arms reduction.

Gert G. Harigel (Switzerland) is an Emeritus Senior Physicist at CERN (Organisation Européene pour la Recherche Nucléaire). He is a founding and council member of the International Network of Engineers and Scientists for Global Responsibility and secretary/treasurer of the Geneva Inter­ national Peace Research Institute.

Patricia Lewis (UK) is the Executive Director of the Verification Technology Information Centre in London. She was a consultant to the UK government during the CFE Treaty negotiations and has published widely on the verification of arms control and disarmament treaties.

Arto Nokkala (Finland) is a retired lieutenant-colonel (GSO) and former Senior Research Officer of the Department of Strategic Studies in the Finnish National Defence College. Currently he is a visiting researcher at the Tampere Peace Research Institute of the University of Tampere, Finland.

AlessandroPascolini (Italy) (co-editor) is Professor of Physics at the University of Padua and Vice President of ISODARCO.

Dietrich Schroeer (USA) (co-editor)is Professor of Physics at the University of North Carolina at Chapel Hill. He developed a course on science, technology and military affairs and is author of Science, Technology and the Nuclear Arms Race.

Hartwig Spitzer (Germany) is Professor of Physics at the University of Hamburg and a member of its Center for Science and International Security. He has been co-organizer of several conferences on security issues and global development problems. He is currently chairman of the International Network of Engineers and Scientists for Global Responsibility.

Frank von Hippel (USA) is Professor of Public and International Affairs, Princeton University, and chairman of the Research Arm of the Federation of American Scientists.

Ciro E. Zoppo (USA) is Research Professor Emeritus of International Relations in the Political Science Department of the University of California at Los Angeles. His most recent publication is The Future Role of the United States in European Security.